The Copenhagen Airport, Oldest in Europe

This Danish Københavns Lufthavn, Kastrup, is the largest airport in the Nordic countries. It is located on an island (Amager), about 10 minutes from the city centre. The terminal was designed by Vilhelm Lauritzen, a pioneer among architects. Consecutively, it is also one of the oldest international airports in Europe, with an annual traffic of 30 million passengers. This modern International airport serves Copenhagen, Denmark, the entire Zealand, the Øresund Region, and a large part of southern Sweden. Moreover, it is the busiest airport for international travel in Scandinavia. 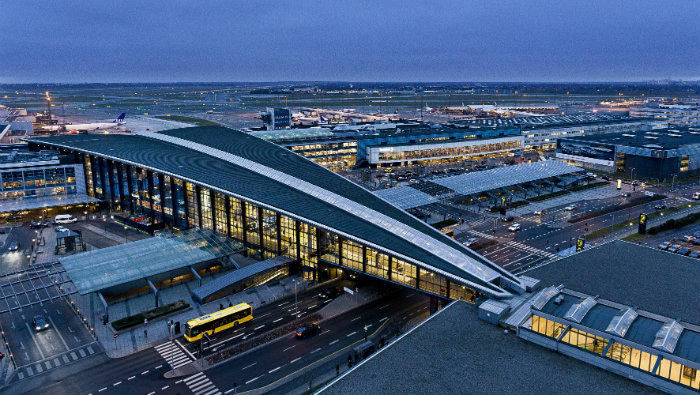 The airport was announced the most modern international airport in Europe, after it remained untouched by the acts of the World War II. It is owned by Copenhagen Airports A/S, represents all worldwide airlines, and is open 24 hours 7 days a week. Additionally, it cheerfully serves about 50,000 passengers every day.

The first class service offered by 1900 quality employees, will ensure your well being and entertainment. Not to mention, the Airport is well equipped with duty-free shops, internet accessibility, refined lounges, classic boutiques, vibrant restaurants, cafes, bars and more.

The Design and History

An impressive delta-shaped terminal (T3) awaits your presence. To begin with, the Airport has received its original name from the small town of ‘Kastrup’, where its located. Inaugurated on 20th April 1925, Copenhagen Airport was the 1st civil airports in the world. Uniquely, a primitive yet spacious terminal built from wood, flaunting a balloon mast, and a few meadows used as runways. What’s even more fascinating, is that the grass on the runways was kept short by shepherding the sheep before take-offs and landings.

Let me sum it up by saying, that the Copenhagen Airport has elegant architecture, irresistible Scandinavian design, and plenty of shopping outlets. A new arrivals hall, new modern baggage handling facilities, an underground railway station, 2 large underground parking facilities, the list just gets better and better. This airport is one of the main hub used by the Scandinavian Airlines, which handles 60 scheduled airlines, and 108 jet bridges.

Self Service Kiosks for Check In

Many airlines allow its passengers to check in, by using the self service kiosks at the airport, or by printing out the boarding pass from the airline’s website. The Copenhagen Airport offers a number of self check in kiosks, located right opposite the check in counters. Most global travellers utilise this facility, to facilitate the check in process. You can also check in 24 hours beforehand, by using the web check in feature online.

If you have carry on flight luggage, then you can drop it at the baggage counters at Terminal 2 and 3. After you get the boarding pass, walk towards the left alley, and keep walking till you reach security check in counters. Since the queues are further categorised between domestic and international, make sure you stand in the right one.

Once you cross this zone, you hit the duty free and other shopping outlets. Well, Shop as much as you like, as you may have an hour or two before you catch the flight. Don’t forget to claim refunds at Tax Free outlets.

Denmark Tax-Free Refund counter, handles export validation at the “Danske Bank” in the Arcade area at Terminal 2 and 3. Furthermore, you can exchange the refund amount at the Danske Bank  between 6 AM and 8:30 PM everyday.

Nonetheless, the trip from the airport to the City takes just 15 minutes. There are easy accessibility options to and from the Copenhagen Airport. These can be reached by Bus or a Taxi, which are available right at the entrance. The railway station is beneath Terminal 3, where the Copenhagen Metro connects to all major Danish cities. In addition, the Öresund Railway will take you directly to Sweden.