I am wandering through the lanes of my place of birth, Dadar, getting nostalgic about the days gone by. Hindu colony and my school, IES… Nearby are the iconic colleges, Ruia and Poddar. The main road in Hindu colony, running parallel to the now defunct railway line, was once lined with huge rain trees… Alas! These trees died off due to some life consuming meallybugs, some 15-20 years back…around 2005-2015. During my school days and upto 2005, these trees were the cause of envy of my friends, who were not lucky enough to stay in Hindu colony… So many birds species, from the common crow to the pretty parrots, had their home in these very trees. Lots of squirrels bounded along from one branch to another and from one tree to another, chirruping along with gay abondon. During my childhood, I remember a few monkeys too, in these very trees. Especially from 2010 onwards and by 2020, must of these gentle giants were reduced to stumps… Turned into canvasses for the artists… Grotesquely coloured…

Now there are no ground floor flats in Hindu colony… And this is the state of affairs everywhere in Mumbai, the change started happening since the great flood of July 2005, when most of such flats got flooded and residents had to bear losses worth crores of rupees… For some, the loss was irreplaceable, what with many of them losing their loved ones. Lot of redevelopment took place, and many such buildings were brought down to be replaced by high rises, having stilt parking. Even my sisters family , who lived in the ground floor flat had to shift to a higher floor. 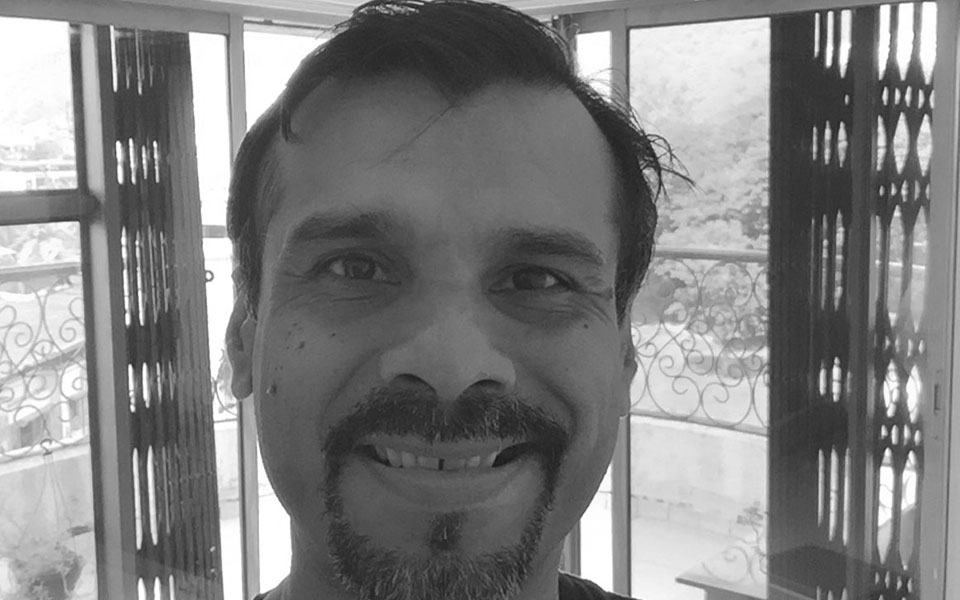 But the final nail in the coffin for the old way of life of Mumbai, was the year 2018. The month was July… Day was Sunday… As is normal on any Sunday, the day had started lazily. People were reading their Sunday Times, their Sunday DNA… when suddenly a loud siren went off all across Mumbai. For a few moments the entire city went pin drop silent… From the airport, a few helicopters were flying off in all corners of the city… And huge loudspeakers on the choppers gave out the dreaded warning to the denizens of Mumbai…TSUNAMI!! yes, the fear of most Mumbaikars , was finally at their doorsteps… And the citizens living with a view of the Arabian sea were the first to witness the wave… First the waters of the ocean suddenly withdrew far back from even the Bandra-Worli sea link… The skies became dark… And in the distance these citizens could make out a huge wave coming at them… As it rushed in towards the land, it devoured the sea link, washing it away, as if it were made of Lego bricks… The buildings and koliwadas lining the sea, were the next target of this huge wave, the koliwadas just disappearing in the waters and the buildings, initially acting as a barrier, but then crumbling under the huge weight generated by the water wall. The waters then rushed into far inland, the cars, buses and other sundry vehicles becoming a party of the debris, causing a loud groaning sound reverberating all across the lovely city, interspersed with the shrieks of the people getting washed away. But by the time, the waters jumped over the lifeline of the city, the railways, it had lost its force, and did not cause much life damage beyond… Thus my friends and relatives and family , staying in Hindu colony, were spared, but had a huge economic loss. Mumbai lost many lives in this deluge… And the waters stayed back, it did not withdraw back to the previous boundary between land and sea. Thus the resilient citizens of Mumbai had to learn living in the water, which was touching almost the ceiling of some ground floor flats, still existing in 2018.

So here I am, in 2025, visiting my relatives and friends living in Hindu colony. I came from my current residence in Thane, which, to my good fortune, still on land , but I had to park my car, near the Bhandup creek, and then catch the Uber water taxi… Yes, now the only way to commute to Mumbai, is through the waters, either by a water taxi like Uber, Meru, etc… Or by the BEST motor boats, which are usually overflowing with people. The wandering, through the lanes of Dadar, is now done in these water taxis. The long defunct railways, have ceased to exist within Mumbai, and now operate beyond Thane. The bullet trains, introduced in 2016, between Mumbai and Ahmedabad, now operate from Thane. But hats off to the people of Mumbai, who have converted their city, into Venice of the east. The previous big playgrounds like Shivaji Park, are now huge salt water bodies where people now go for joy rides on the small motor boats, introduced by some entrepreneurs. The city of Mumbai, which was known for its cricketers, is now equally well known for Olympic medal winning swimmers.
Folks did I scare you with my story? But we need to think and plan, otherwise our Mumbai will see such a day, not because of any tsunami, but it could be due to totally man made reasons.
Yatin