NIBM is fast developing into the KP and Baner of South Pune and with good reason. With some amazing brands setting shop in the vicinity with innovative menu to boast of, the locality is all set to boom.

One such new resto-bar that is taking the city by storm is Beto’s Kitchen and Bar. Located near the Corinthians Club, this place boasts of a top-notch ambiance and ample seating catering to varied preferences. The indoor section has a dance area along with lounge styled seating while the rooftop offers regular tables, a ship styled dining experience as well as private cabanas which can easily accommodate 8-10 pax.

One USP of Beto’s is their cozy sofa seating in a long corridor offering some privacy where one can spend a wonderful and romantic time with their loved ones, sitting side-by-side and gazing out on to the city landscape, and possibly their future together. [<3]

Apart from the thumping music which is a regular feature, Beto’s also offers some live performances on some days. The day #TheBTeam and #FriendsOfTheBTeam were called over for a tasting, we were lucky enough to witness a wonderful belly dancing show. Watte show!! [Maasha Allah, Habibi, Maasha Allah; Badi Hi Mast Hai Tu, Badi Kambakht Hai Tu!] 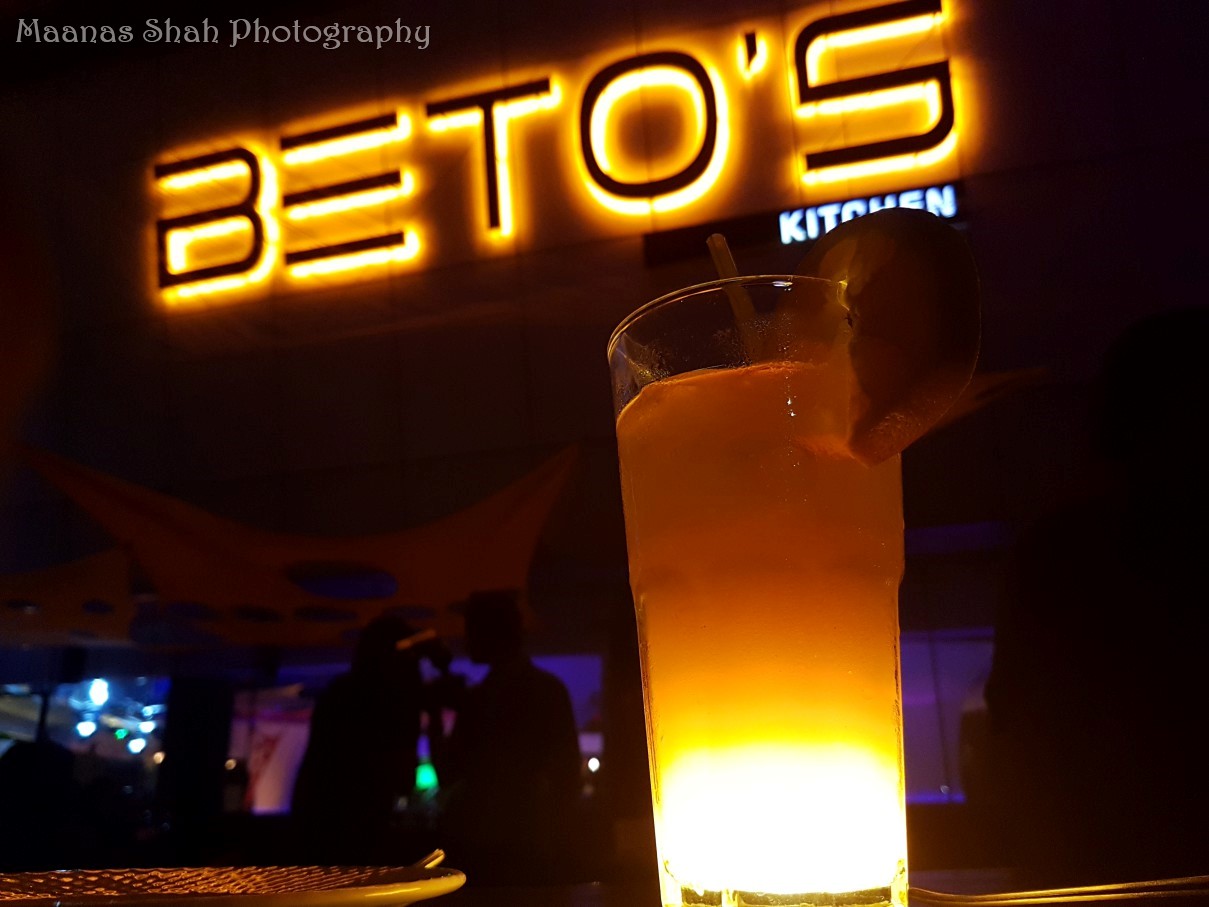 Made with white rum, lime & orange juice, red wine and sugar syrup, the Sun Setter is definitely an evening drink while you gaze as the sky turns orange. Reflecting the sky in the glass, the drink too had the classic setting sun colors and had a taste to match.

Tried the Kiwi Martini which had nice strong flavors of the fruit syrup as well as the alcohol. #YumYum #HighlyRecommended

The Bloody Mary has always been on my no-fly list and it ain’t taking off anytime soon. Not on my watch, it isn’t. Who mixes alcohol with tomato juice and Worcestershire sauce?? [*eyes rolling*]

Made with Tequila, Vodka, Bacardi, Gin, Triple Sec and Old Monk & 6 Types of crush/syrups and topped with lemonade, the Beto’s Special was one potent drink [Grand Daddy of the LIIT] however could’ve had a stronger punch had the spirits been mixed better. #HighlyPotent #MustTry

Overall the drinks were pretty good however weren’t mixed well hence the delta of the potency was significant between the initial few sips and the final glugs.

Coming to the food now, we were treated to dishes across the spectrum of cuisines Beto’s deals in.

While the Potato Blini is traditionally a Russian recipe and used with caviar, the variant at Beto’s had spicy American corn and sour cream as toppings. Nice combination of flavors and made for a good first dish.

Potato Farci is basically a dish made with scooped out potato half filled with stuffing of meat and/or veggies and baked in the oven till golden brown. The farci here had creamy cheese spinach & corn and baked with cheese. The bite provided by the crispy skin and the potato complemented the gooey cheese and spinach well. #MustTry

The Prawns in Orange Cilantro Sauce had some interesting flavors however the tanginess of the sauce could’ve been more. Thankfully the prawns were cooked through.

The Chicken Monakv, made with chicken cubes marinated in curd, coconut with Ajwain and cooked in clay oven is something I would definitely recommend. Nice juicy and tender chicken chunks and perfect marination of the curd and spices. The clay oven cooking provided a nice crisp to the edges of the meat. #HighlyRecommeded

Although Koliwada is an area in the Konkan belt, the Chicken Koliwada has been attributed to the rising Indo-Chinese fusion cuisine. Irrespective of the origins, the dish is an extremely popular one if made correctly. Coated with a thick batter and fried till golden brown, it is the marination and spices that worked their wonder here. Wonderful golden brown chunks of perfectly cooked chicken. Paired with a mug of chilled beer and overseeing the beautiful landscape of South Pune, aah, such is the pull of Beto’s.

The Fish Tai Chin had slices of fish tossed in mildly spiced black bean sauce with peppers. Overall the dish had some good flavors however the unpleasant smell emanating from the fish was a bit of a turn-off.

The Mutton Seekh Kebab luckily weren’t dried out in the middle as is the case invariably at most places and still retained some of their juiciness. However the lack of an accompanied dip was sorely felt.

Jamaican Roast Lamb was a tender leg of lamb marinated with red wine and rosemary and accompanied by sautéed vegetables. All the flavors were bang-on and not overpowering at all. Such perfection in the cooking and in the seasoning, we ended up ordering this yet again – just to satiate the carnal carnivores within us. #YumYum #HighlyRecommended

For desserts, we opted for the ubiquitous Sizzling Brownie with Ice cream. While they usually do not do that, our request for flambe-ing the same with alcohol was instantly accepted and the result is there for all to see.

Beto’s has something for everyone and for every occasion – be it a chilled out evening with friends, a romantic date with a special someone, celebrating with a large group or simply a place to let your hair down and dance your worries away.

A big shout out to Vishaka Solanki for inviting and hosting us. Never seen such a friendly and immersive host who personally ensures that the patrons are having fun at each and every table.

Disclaimer: The invite was for a complimentary food tasting event.

This review is a narrative of my experience at the event. The views expressed in this review are solely mine and others are more than welcome to agree or disagree with the same. The review is in no way influenced either personally or commercially nor has it been lifted, copied or plagiarized from any source however I have done my due diligence on the event via publicly available information on the internet and as shared by the client/PR agency.