By definition, nepotism refers to the practice of a powerful person to give jobs and other favours to family members. This is an important issue that is highly prevalent in our nation, and is more often seen in the political scene and the film industry, though it is rampant in every occupation. 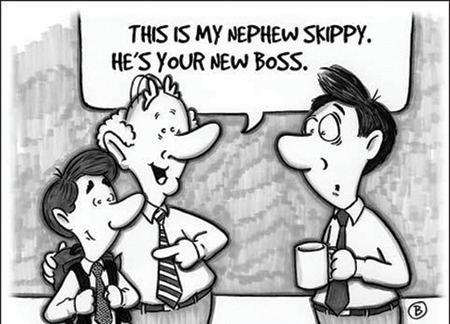 With a heavy rise in population, every endeavour in life has become highly competitive – from education to subsequent job placements, there is heavy rivalry amongst people to prevail and succeed in their careers. Most underprivileged and middle class citizens have to rely on pure merit to move up the ladder of accomplishment, which unfortunately is not a fail proof pathway to success mainly due to the fact that on the other side of the coin, there are people who achieve through favouritism. The value of sweat and diligence is being undermined and the dreams of an average aadmi are being swept under the rug in favour of the more powerful and wealthy.

Supposedly, even nepotism has its own philosophy – they say that power is in their genes, that since they have grown up around influence since their childhood, they have a mastery over the art of how to wield this power. They argue that these people have been “born into their roles”. Nepotism is widespread – after all, blood is thicker than sweat, isn’t it? However, all our past leaders and icons have come from humble beginnings, so why should the situation now be any different?

In blunt words, nepotism is harmful to our nation. Instead of asking ‘what you know’ the society today asks ‘who you know’.  If bias is perceived in the workplace, it causes dissatisfaction and lack of work morale in the workplace. Moreover, people would become bitter and less productive if they feel that their path to promotion is being diluted in the face of partiality. 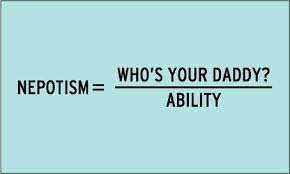 Nepotism in our country is accepted as an undeniable fact. In a country where we have a booming population of talented youth, everyone deserves an equal opportunity to triumph. As a democracy, we should always choose a meritocracy in every walk of life.