There’s new enthusiasm in the air. The men folk are excited, looking forward to their yoga sessions. The laziest of couch potatoes are now leaping with new vigour. The wives have pushed their husbands since long, to join Yoga classes, with little success. But now things have changed for the better.

Rakesh is a financial wizard who slogs throughout the week, his day starting at 6.30 am. and ending at 10 pm. He hardly gets time to exercise, neither in the morning nor in the evening. Work pressures force him to sometimes skip lunch. He keeps uneven eating hours, totally focused on his work. And the weekends are spent in lazing around the house and enjoying his beer sessions with his buddies. This unhealthy lifestyle has taken its toll and he suffers from hypertension. His beloved wife, Simran, keeps pushing him to take up exercise but with zilch success. And similar is the case with many other households in their locality.

One Saturday night, Rakesh comes home a little high and tremendously excited. Enthusiastically, he tells Simran about his plan to join a Yoga class next day. Simran is pleasantly shocked! She is not convinced but decides to humour him. Next day she wakes him up, early in the morning. “Rakesh, don’t you have to go to yoga today? Rise and shine!”. After half an hour, the king has still not woken up from his slumber. “What happened to your yesterday’s resolution? Why are you still in bed?”. Rakesh then mumbles about going in the evening. “Who does Yoga in the evening. Are you in your senses.” But no amount of threatening or cajoling disturbs Rakesh from his siesta. 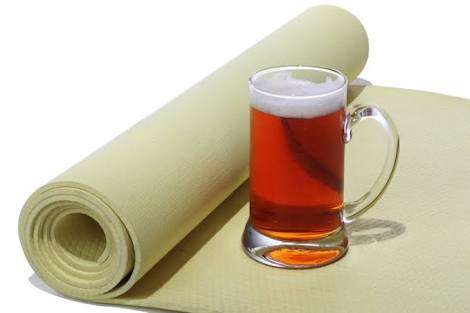 Come evening time and Simran finds Rakesh ready with track pants and all. And he is unusually enthusiastic. He reaches the yoga gym with a spring in his step. The yoga session starts with the usual deep breathing exercises. It then proceeds to simple stretches. Then the serious asana’s start. And then it happens. This is what has pushed so many men to suddenly take a liking for yoga. After a set of every 3 asanas , a glass of beer is served. Some mumbo jumbo about how beer is good for the system, is served by the new age Guru. The Guru himself is demonstrating a very unique and complicated asana. Standing with his feet together, he lifts his leg backwards and in the same fluid motion arches his back, lifts one of his hands, tilts it backwards, touching the tip of his finger to his toe. And this is not all; in the same motion, he picks up a glass of beer with his other hand, takes it above his head and pours the contents into his throat. Then he starts demonstrating more asanas , the level of difficulty going up, but all the asanas are accompanied by a glass of beer. All this while, the students are reaching their higher levels of consciousness, thanks to the madira. After 2 hours, everyone is satiated, the students due to obvious reasons and the Guru, due to the fact that he had been able to loosen their purse strings.

Rakesh returns home where he is given a traditional welcome by his doting wife. She sees that her husband’s cheeks are unusually flushed and there is a radiance on his face. She is very happy to see this change in her husband.

Now guys, this is not a rambling of an idle mind but a very likely scenario since this has already started in the US of A, where people are always trying to bring some variety to anything they do, to overcome their boredom in any routine activity.